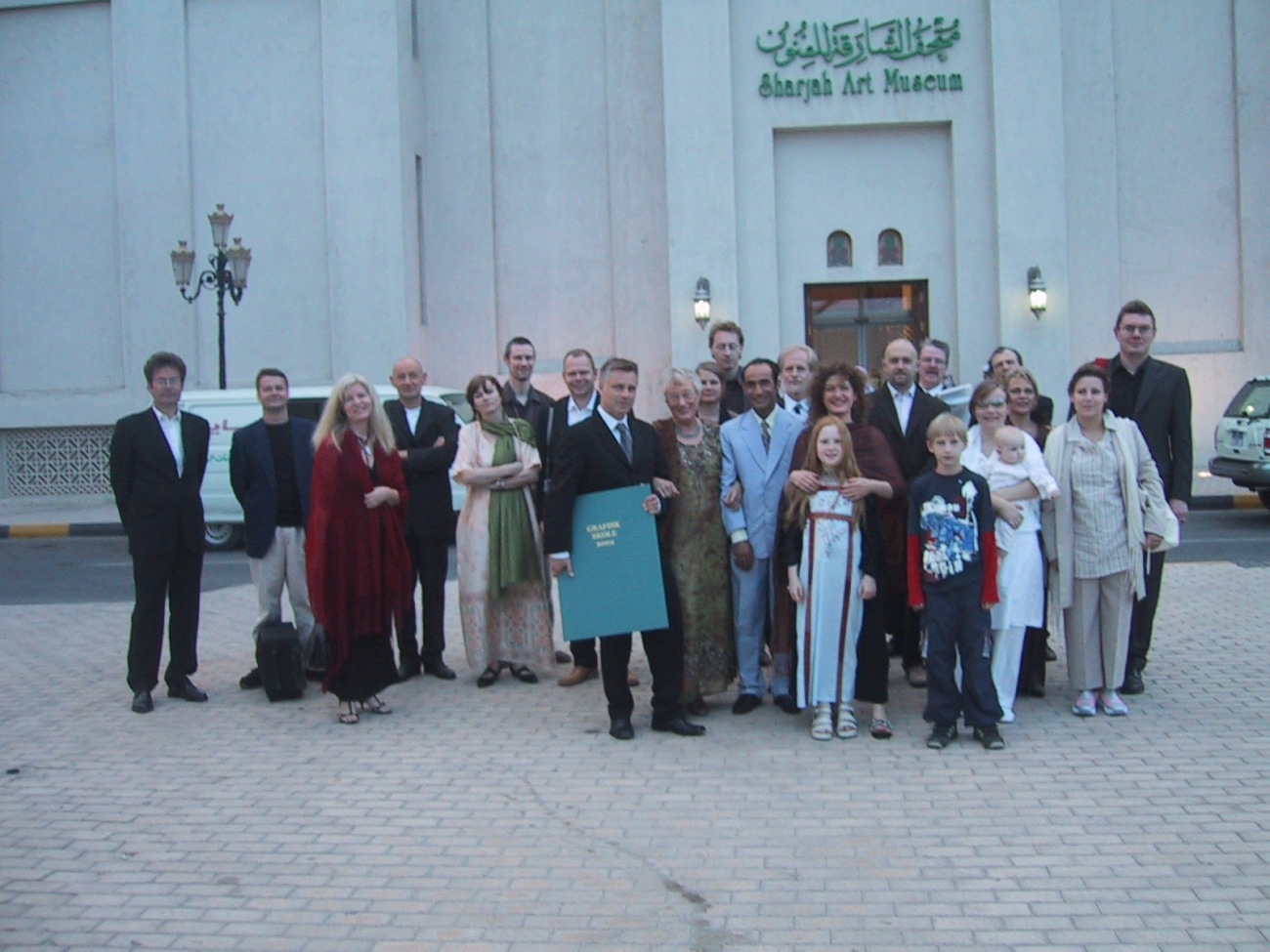 INTRODUCTION
On April 13, 2004 an exhibition opened at the Art Museum in Sharjah presenting work by seven Danish graphic artists and photographers, namely Lars Grenaae, Rasmus Eckardt, Bertil Skov Jørgensen, Smike Käszner, Anne Marie Ploug, Erik Steffensen and Finn Naur Petersen.
The exhibition was inaugurated by the Ruler of Sharjah, Sheikh Sultan bin Mohamed Al Qasimi. After the opening ceremony, the Sheikh made a speech that was broadcast on television and addressed to the exhibition’s participants as well as to the rest of those taking part in the cultural exchange projects. He called attention to the fact that the projects in the cultural exchange agreement serve as model examples of how a collaboration can elicit mutual inspiration and new insight. He emphasised the importance of being able to continue the collaboration for many years.
At the exhibition, the first preliminary sketch for one of the cultural exchange agreement’s prospective projects was presented. This was the MOONLIGHT GARDEN, which is a present day interpretation of the classical, poetic, Arab moon garden carried into effect by the architect Jane Havshøj and the sculptor Mogens Møller, working in collaboration with lightartist and technical advisor Flemming Brandtbjerg, numerologist Nasser Moaedi Jorfi, astrophysicist and poet Salim Abdali, archaeologist Dr. Al Azzawi and poet Lars Bukdahl. In a television broadcast, the Sheikh expressed his great enthusiasm for this project which, according to his point of view, constitutes one of the first modern European interpretations of a layout system that is central to Islam. He asked whether the project could be transformed into a model that would be so precise - on every level of its conception - that the MOONLIGHT GARDEN  could be constructed in Sharjah.
The exhibition was followed up by a seminar that was held at The American University in Sharjah and Sharjah University. The theme was "ART AND SCIENCE " and "ART IN THE PUBLIC SPACE". People from Denmark and from the Gulf States took part in the seminar.
The manuscripts - translated into both English and Arabic - of most of the lectures were handed out to the participants. There is currently a plan to print these texts.

SEMINAR
The exhibition was followed up by a seminar that was held at The American University in Sharjah and Sharjah University. The theme was "Science and Art" and "Art in the Public Space". People from Denmark and from the Gulf States took part in the seminar.
The manuscripts - translated into both English and Arabic - of most of the lectures were handed out to the participants. There is currently a plan to print these texts in 2006.

BOOK RELEASE: ART AND SCIENCE. ARCHITECTURE´S AND ART´S SITE-SPECIFIC PROJECTS.
Ten lectures given at the School of Architecture and Design, The American University of Sharjah and the College of Fine Arts, Sharjah University.
Else Marie Bukdahl (ed.)
The Royal Danish Academy of Fine Arts, 2006
Else Marie Bukdahl: "The Relation between Art and Science"
Jørn Ankjær: "The Sun and the Colours – the Scientific and the Artistic approach"
Henrik B. Andersen: "The Contemporary Conception of Space"
Peter Wheeler: "The Painter´s Eye"
Mogens Møller, Jane Havshøj & Nasser Moaedi Jorfi: "Moonlight Garden"
Dorte Dahlin: "Sampling Hirtshals. A Play on Art in the Public Space"
Kevin Mitchell: "Exchange and Adaptation"
George Katodrytis & Khalid Al Najar:  "The Dubai Experiment"
Lars Bukdahl: "Project for a Poet´s School implemented at Sharjah College of Fine Arts" 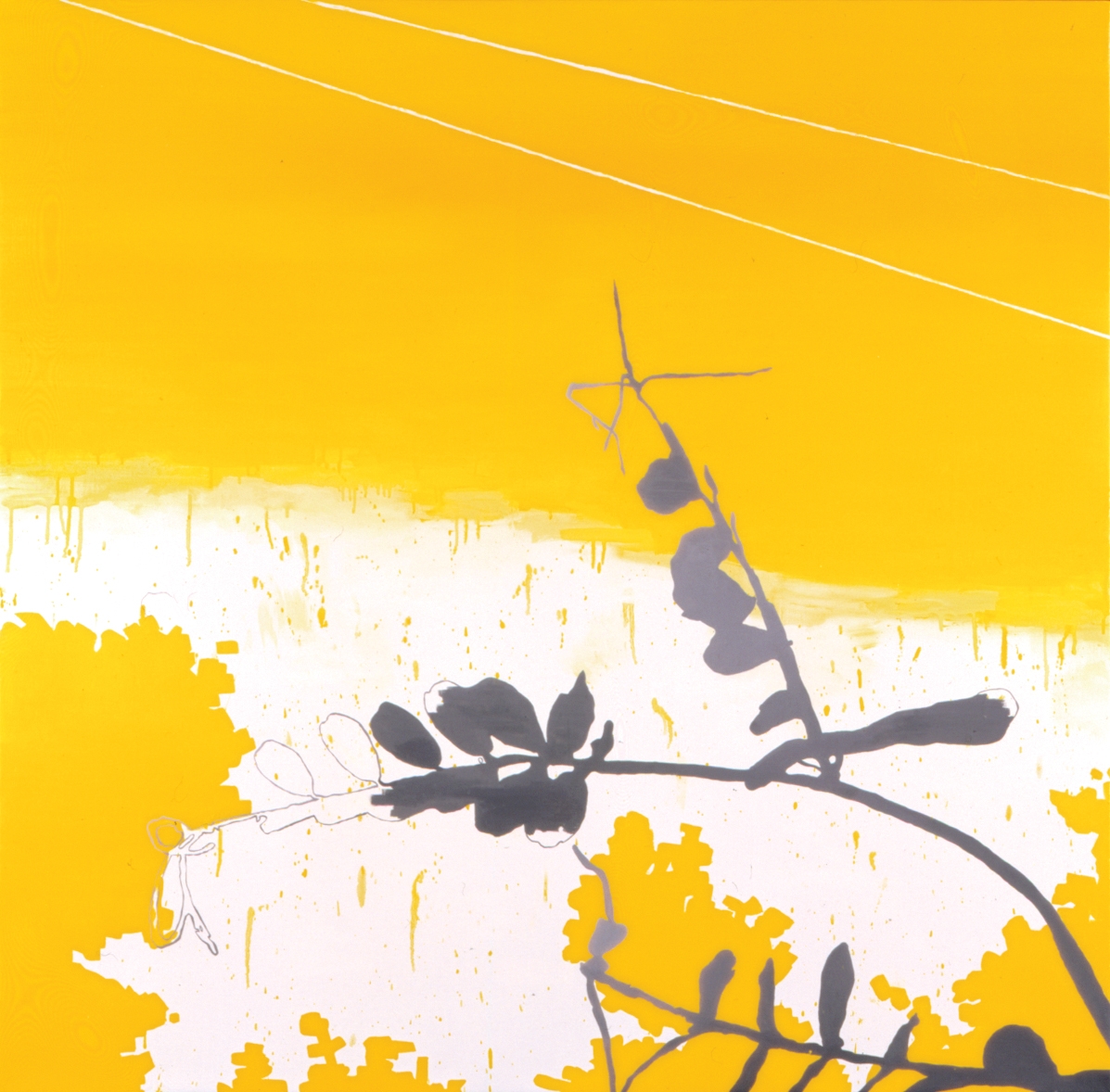 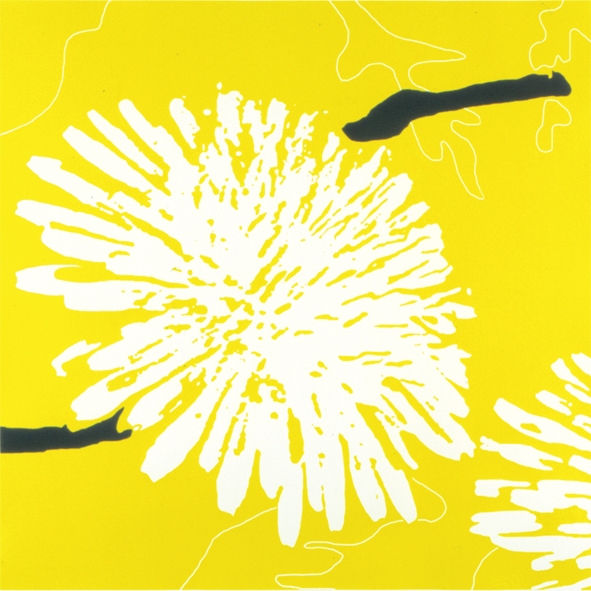 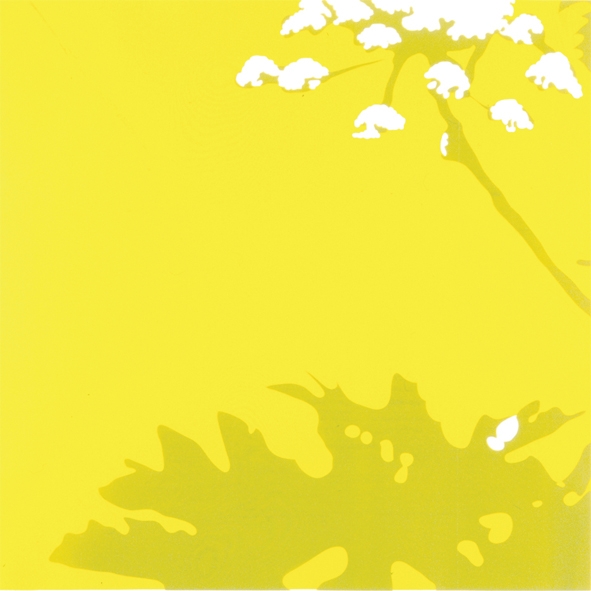 PRESS
Khalej Times
15th April 2004
At the occasion of the opening of the art exhibition "Seven from Afar" Sultan: Establishing an Arab cultural institute in Denmark will help transmit the right image to the region.
Last night His Highness Sheikh Dr. Sultan bin Mohamed Al Qasimi, member of the High Council and the Monarch of Sharjah, opened the exhibition "Seven from Afar". The exhibition at Sharjah Museum of Art was organised by the Directorate of Art, Department of Culture and Information, in cooperation with the Royal Danish Academy of Fine Arts.
The exhibition will remain till the end of April 2004. 7 artists contribute with more than 85 graphic art works.
His Highness, the monarch of Sharjah, cut the traditional rope at the exhibition declaring it officially open. In the aftermath of the official opening His Highness sauntered around the museum jointly with the visitors and investigated the graphic art works, the contributions and the artistic experiences by the Danish artists, who told him about graphic art in Denmark. Beside the exhibition the Danish artists conducted workshops and other cultural and artistic activities.
At the end of the round tour of the exhibition, His Highness, the Monarch of Sharjah, was given a souvenir by the leader of the Danish delegation, Dr. Else Marie Bukdahl, the headmaster of the Royal Danish Academy of Fine Arts. The souvenir , PRINTS OF DENMARK, was a documentary publication telling about the many development periods of the Royal Danish Academy, containing old images, and names of the pioneers, contributors and founders of the Danish Academy which has existed for over hundred years.

His Highness Sheikh Dr. Sultan bin Mohamed Al Qasimi, member of the High Council, the Monarch of Sharjah, confirmed during the end of the ceremony that such a cultural stimulation and contact with Denmark during the last period of time has helped crystallising a vision for an ARAB CULTURAL INSTITUTE IN DENMARK . Such centre will enlighten and help transmitting a proper Arab image to the region. It will be a place for dialogues, debates and cultural workshops. In addition there will be a library containing several hundred Arabic books, which will be translated into Danish. His Highness mentioned that this is an attempt to keep the process of engagement between both countries progressing and flourishing.

His Highness pointed out that such a phenomenon of artistic exchange can be regarded as a positive spring in the Emirate Association of Fine Arts. Hosting numerous artistic and cultural exchange projects of this character together with some European countries can only give our artists positive lessons and inspiration.
In the end of the ceremony, His Highness wished success and prosperity for everyone.
Present at the opening ceremony were His Highness Sheikh Dr. Sultan bin Mohamed Al Qasimi, the Deputy of Sharjah's Monarch; Sheikh Abdullah bin Salem Al Qasimi, the leader of the Emir's palace; Sheikh Abdullah bin Mohamed Al Thani, the president of civil aviation; Sheikh Khaled bin Abdullah Al Qasimi, the president of harbours and marine life; Sheikh Sultan bin Mohamed bin Khaled Al Qasimi, the president of the general directorate of sport and social facilities; the gentlemen Mr. Abdurrahman Al Garwan, the consultant at the Emir's palace; and Abdullah bin Mohamed Al Owais, the general director of the Department of Culture and Information.
Also present at the opening ceremony was the entire Danish delegation; about 25 members, artists, journalists, intellectuals as well as councillors from several friendly countries; several directors and business leaders as well as members and heads of the Emirate Association for Fine Arts and several individuals and art appreciators.
This particular exhibition was a continuation of the brother exhibition FIVE FROM AFAR which presented 5 visual artists from the Emirates in Denmark. Workshops and seminars were conducted during the one month long exhibition during the visit to Denmark. 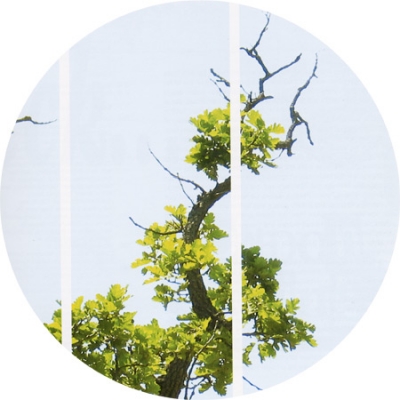 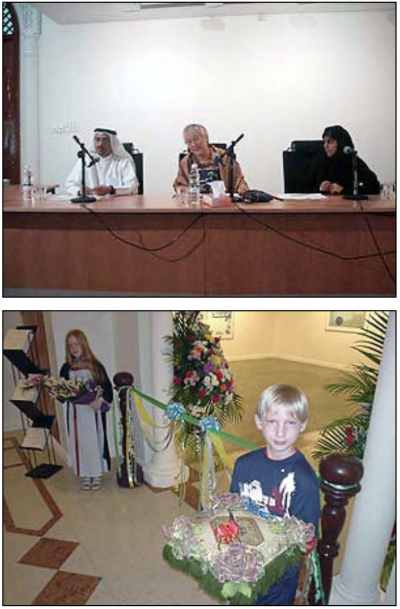 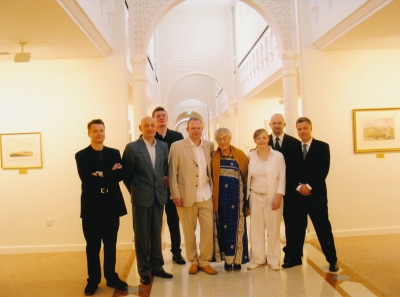 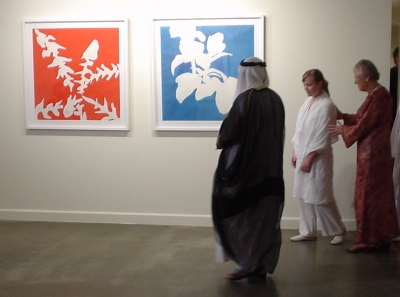 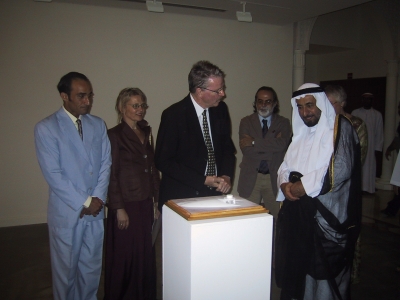 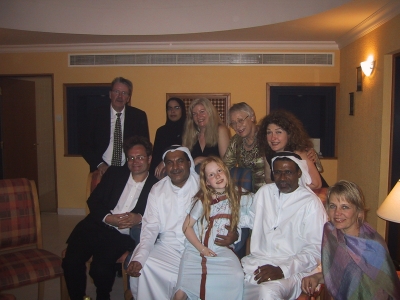 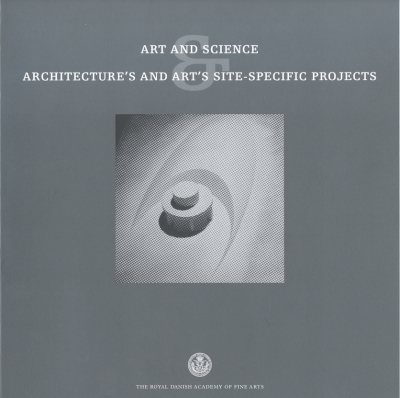 Book release: ART AND SCIENCE, 2006. Lectures given at the seminar. 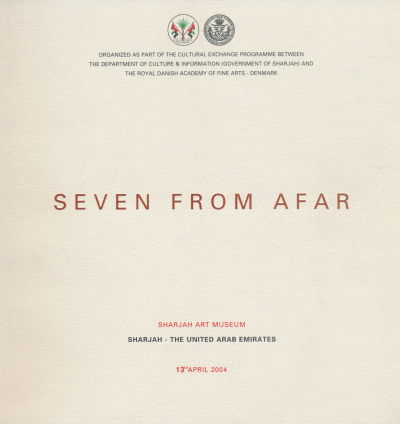